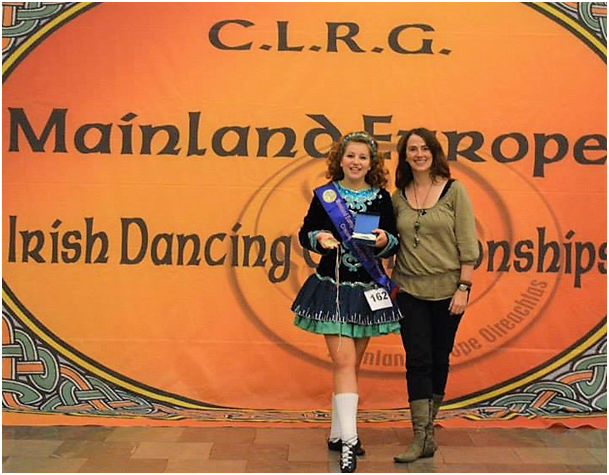 Áine started Irish Dancing at the tender age of 4 years at the O’Rourke School of Irish Dancing in County Clare, Ireland. Her teacher Maureen O’Rourke is, to this day, a well-respected and renowned teacher and adjudicator in Ireland and abroad. Áine danced competitively as a solo dancer for 10 years and won prizes at local and county championships. In those pre-Riverdance days few fourteen year olds were still dancing, so she turned to playing Gaelic Football. She was just as successful at this somewhat more robust pastime, representing her county victoriously in three All-Ireland finals. 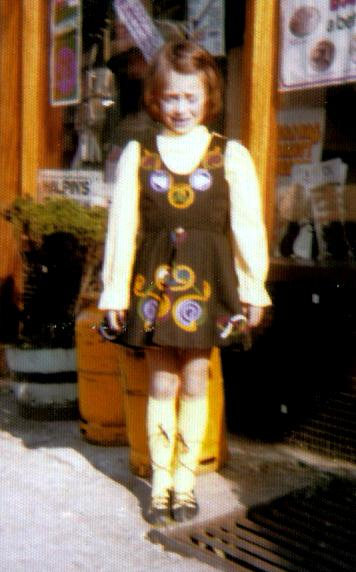 After graduating with a Bachelor Honours in German & Marketing, she moved to Germany in 1992 for work and soon after joined The Celtic Cultural Society, a now sadly defunct club for ex-pats and Germans who loved Irish and Scottish culture. Here she rediscovered her love and enthusiasm for Irish dancing, dancing regularly on stage and running occasional courses and workshops. After the success of Riverdance, which brought Irish dance to a whole new international audience, Áine was persuaded to found the Halpin School of Irish Dance in 1994.

From a modest 15 dancers, the school has now grown to over 80 dancers and continues to expand. Both children and adults receive weekly tuition in Soft and Hard shoes and Ceílí Dancing. Áine also holds workshops, private tuition, show and feis training in Stuttgart and the surrounding regions. Two years after the establishment of the Halpin School of Irish Dance, Áine founded the show group Fáinne which rapidly established itself as one of the best Irish dancing groups in Southern Germany. Fáinne is in high demand and performs regularly on stage at various events, including theatre shows, festivals and concerts.

For the past 10 years she has organised her own competitions (feiseanna) which have been a huge success and provided extra motivation for her dancers. Since 2000 some of her dancers have taken part in national and international Irish dance competitions from which competitors all over Europe and beyond take part. Her achievements include dancers placing in the top 5 at the European Championships five years in a row and qualifying for the World Championships.

Áine has been involved with RCCEA since its foundation. From 2009 to 2018 she served as treasurer of RCCEA formally known as RTME. She was part of the organising committee which was responsible for organising the 6th Annual Irish Dancing Championships in Europe (Oireachtas Rince na hEuropa) which took place in Bremen in November 2009. She served as Chairperson and Treasurer for the 7th Mainland Europe Irish Dancing Championships which took place in Stuttgart, Germany in November 2010. Áine is a fully qualified Irish Dance Teacher (TCRG) registered with An Coimisiún Le Rinci Gaelacha (the largest Governing Body of Irish Dancing worldwide) and a member of RCCEA (Regional Council of Continental Europe & Asia). Prior to Áine’s graduation, Germany had only one CLRG qualified teacher. Áine is the first such qualified teacher in the Baden-Württemberg region. Halpin School reached a milestone in 2019 celebrating 25 years of Irish Dancing in Germany.